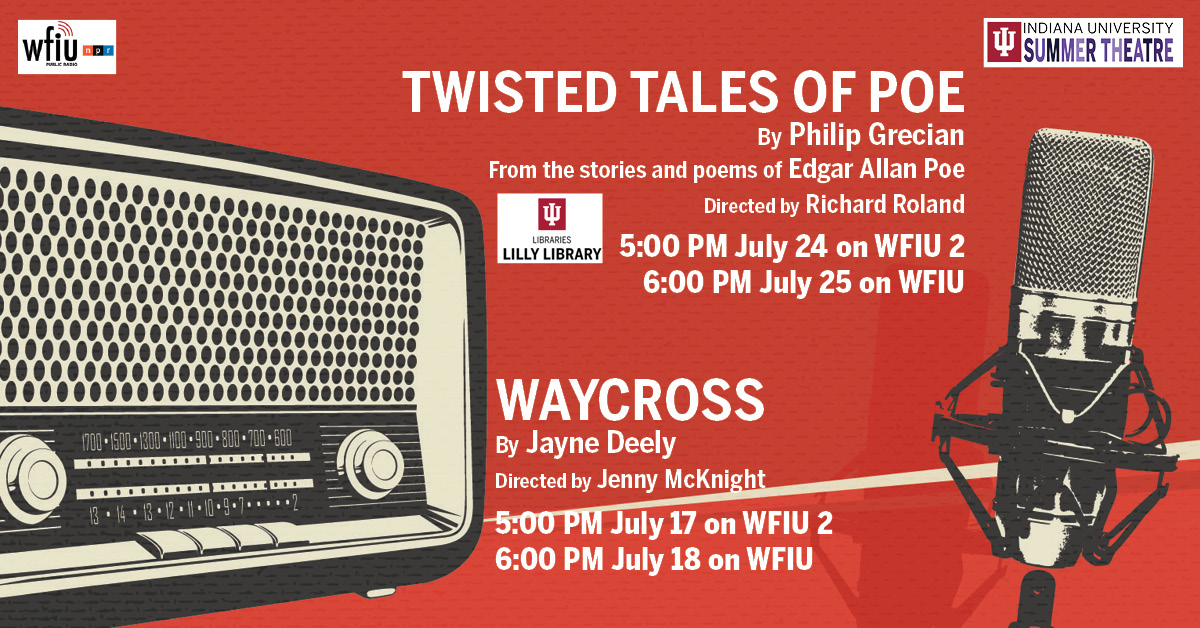 Waycross, written by Jayne Deely and directed by Jenny McKnight, airs Saturday, July 17 at 5 p.m. on WFIU2 and Sunday, July 18 at 6 p.m. on WFIU. Originally developed and produced for the IU Theatre & Dance 2021 At First Sight Festival of New Plays, Waycross is about finding heroes where you least expect them. In this play, CIA asset Lee is assigned to the nation’s riskiest and most vital missions. Her arch-enemy Nadia Rachnamninov is close on Lee’s tail through every mission from Mauritius to Minsk. At this point, Nadia is the closest thing Lee has to a friend, unless you count CIA Director Skybell, who seems to live in Lee’s earpiece. When Lee finds herself charged with the task of infiltrating a community theatre in Georgia undercover as something called a dramaturg, she has never been more in over her head. The clock’s ticking, every second bringing the town closer to potential destruction, and opening night.

The second radio play, Twisted Tales of Poe, airs Saturday, July 24 at 5 p.m. on WFIU2 and Sunday, July 25 at 6 p.m. on WFIU. Based on four works by Edgar Allan Poe, the prisoners of Leverett Street Jail, Death Warrant Division, await their fates as the doomed tell their stories. A man brought to justice in “The Black Cat,” a sampling of “The Cask of Amontillado,” what “The Tell-Tale Heart” could reveal, and a soul visited by guilt in “The Raven.” These chilling stories converge into an evening’s sampling of Poe, one of America’s most enduring and misunderstood literary giants. This broadcast will also feature conversations and materials from the IU Lilly Library Edgar Allan Poe collection. Written by Philip Grecian and directed by Richard Roland, Twisted Tales of Poe is produced by special arrangement with The Dramatic Publishing Company, Inc., of Woodstock, Illinois.