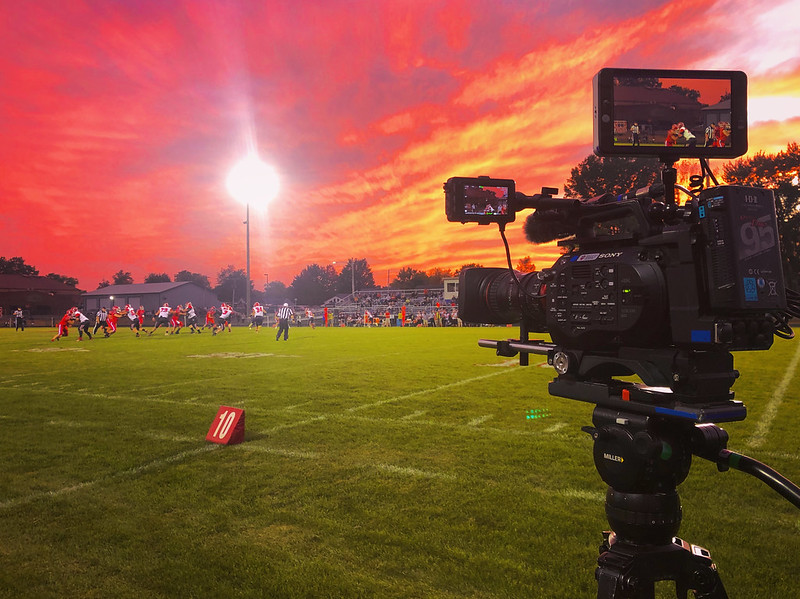 In this behind-the-scenes photo from the making of Spirit of Greene County, the Linton Miners took on the Eastern Greene Thunderbirds in front of a stunning summer sunset.

WTIU producer Reuben Browning talked with us about his experience making the documentary Spirit of Greene County. Read his interview below and be sure to watch the program when it premieres Monday, August 16 at 8pm on WTIU!

Greene County is described as a “hidden gem” in the documentary. What makes it a hidden gem?

The short answer is that not many people outside of the immediate area know about the amazing recreational opportunities and beautiful natural landscapes that can be found in Greene County. In some respects, Greene County has many of the same qualities as Brown County when it comes to enjoying things like hiking and camping yet has managed to stay under the radar for most people around Indiana. There are so many wonderful state parks, charming small towns, and outdoor adventures just waiting to be discovered!

Tell us about some of the challenges producing the documentary during the pandemic. How did you overcome them?

The most difficult challenge was when we had to completely shut down filming for about 4 months, which happened to be in the spring and summer, the most beautiful time of year to capture Greene County’s outdoor landscapes. Unfortunately, even after things started to open back up many of the county’s annual events and festivities were postponed or canceled altogether and I was disappointed we were not able to include them in the story. I had really been hoping to attend and film the 4H County Fair, Bloomfield’s Apple Festival, and a few other events that were affected by the pandemic.

Once we were able to start filming again, we wanted to do our part in being extra cautious in following covid restrictions, and we shrunk our film crew size so it was often just myself and one cameraman. Throughout the whole process, all the interview subjects and people in Greene County were incredibly welcoming and helpful, despite having to frequently reschedule shoots around things like contact tracing and group size restrictions.

What surprised you most during the course of researching and producing the documentary?

I am not originally from this area, so many of the things about Greene County surprised me, but getting to learn about Crane NSWC was really fascinating. To have the third-largest US Naval base in the world tucked away in landlocked southwest Indiana was quite a surprise to discover, and I anticipated that it would be challenging to get anyone from Crane to talk about what goes on there, but I actually found the opposite! The two gentlemen in the film, Larry Fink and Dr. Kyle Werner, were excited and open to talk about the research and military training and support that takes place at Crane.

What was your favorite or most memorable part of producing Spirit of Greene County?

I really enjoyed getting to know and becoming friends with Ben and Armonda Riggs, the owners of Four Flag Farms. One of my favorite shoots was getting to spend a day “sugaring” with them – the first week of the season in which they produce their wonderful maple syrup that they sell at the Linton Farmer’s Market. It had just snowed the night before we filmed and was bitterly cold when we arrived, but we got to spend a few hours around their wood-burning evaporator which was producing the most incredibly sweet, caramel smell – it was just a very idyllic and peaceful setting. Witnessing them working with nature and the land in such a respectful way was really lovely to be a part of. Not to mention the delicious maple syrup we got to sample!

For someone who has never been to Greene County before, what is the first place that you recommend visiting and why?

The first place I usually point people towards is the Sculpture Trails Outdoor Museum near Solsberry. It is such a wonderful mix of fine art and nature that is very unique and special. To get there, you have to drive down a number of small, windy roads through heavily forested areas. Sometimes getting off the beaten path is a real treat – a chance to take a deep breath and get away from the noise. Taking a self-guided tour through the trails is just a great experience. Then on the drive out, you go right by Yoho General Store which is a perfect spot for a post-walk ice cream cone!

What do you hope viewers will learn from the documentary?

Mostly, I hope people will get an itch to visit Greene County for themselves! The people and communities around Greene County are so proud of their culture, heritage, and resources in the area – and are more than happy to welcome visitors. It’s one of the largest counties in Indiana, and just over 30,000 residents live there – so there is a lot of space to explore. Being a community whose fate was often tied to that of the coal mines and the coal industry, residents in Greene County have certainly seen some ups and downs over the years like many other towns across Indiana. I think Greene County is really forging a new and exciting future, taking advantage of the incredible natural and cultural resources that abound there.