Coming This June On WTIU: The Doobie Brothers Live At The Beacon Theatre 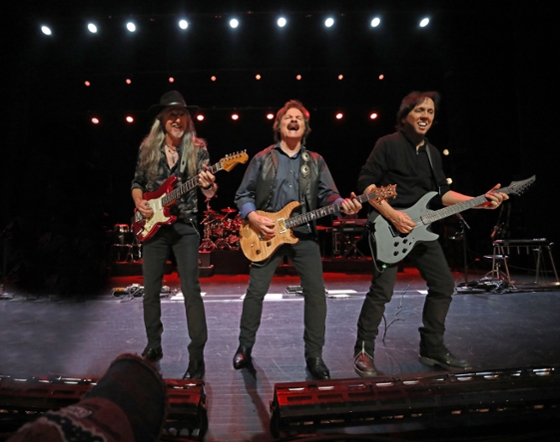 The Doobie Brothers have been delivering mind-blowing, roots-based, harmony-laden, guitar-driven rock and roll for over four decades, selling more than 48 million albums and winning four GRAMMY® Awards. In November 2018, they returned to the Beacon Theatre in New York City for the first time in 25 years to perform two of their landmark albums, Toulouse Street and The Captain and Me. These historic concerts offered an opportunity for Doobie fans to hear deep cuts and songs never before performed live by the band. This amazing live concert experience was captured for PBS viewers in THE DOOBIE BROTHERS LIVE AT THE BEACON THEATRE, part of special programming premiering on WTIU on June 1 at 8pm and June 2 at 12:30pm.

Platinum-selling Toulouse Street (1972) includes hits “Listen to the Music,” “Rockin’ Down the Highway” and “Jesus Is Just Alright.” Double-platinum-selling The Captain and Me (1973) produced the hits “Long Train Runnin,’” “China Grove,” “South City Midnight Lady” and “Without You.” Both albums led to the band becoming one of the most iconic of their generation.

THE DOOBIE BROTHERS LIVE AT THE BEACON THEATRE features hits and fan favorites from both albums. Act One opens with “Rockin’ Down the Highway,” includes the title track “Toulouse Street,” “Jesus Is Just Alright” and closes with “Snake Man.” Act Two spotlights the band’s classic tracks: “Long Train Runnin’,” “China Grove” and “South City Midnight Lady.” Act Three features “The Captain and Me” and closes with “Listen to The Music.”

Boasting one of the most loyal fan bases in music, The Doobie Brothers continue to write and record new material and tour the world. They released their latest album, Southbound, on Arista Nashville. Southbound features new recordings of the band’s greatest hits with country music’s biggest stars, including Blake Shelton, Zac Brown Band, Brad Paisley and Toby Keith. Their No. 1 singles “Black Water” and “What A Fool Believes” — both gold — lead a catalog of indelible songs that include those mentioned above as well as “Take Me in Your Arms,” “Takin’ It To The Streets,” “Minute by Minute,” “You Belong to Me,” “The Doctor” and more. In all, the Doobies have tallied up five Top 10 singles and 16 Top 40 hits. Beginning with their multi-million-selling sophomore collection Toulouse Street, the Doobies have three multi-platinum, seven platinum and 14 gold albums. Their Best of the Doobies album has sold more than 12 million copies, making it a rare “diamond record.”